The most widely used angel style is the wings of an angel. Here is a brief discussion on the most common tattoo designs using an angel body parts: Angel Wings Tattoo. Angels are anthropomorphic – meaning in the form of men – winged forms intended to transmit the Word of God to mankind. Angels tattoo the divine will and are the messengers of God. Winged messengers appear in a number of religions as an intermediary between the spiritual and material worlds, but most often appear in the Islamic, Jewish and especially Christian faiths. 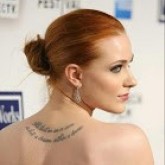 Hi, Everyone! I am Andros Franklin, working as a Marketing expert. My hobbie is explore about tattoo ideas and body arts. I was started blog posting for my personal interest but now i converted that into professional service.